One of the key industries responsible for the expansion and evolution of the NFT market is “Play to Earn aka P2E”. Axie Infinity (AXS) is a Play to Earn (P2E) game that not only came with the sole aim of rewarding players with economic opportunity but introducing blockchain, in the simplest and most exciting way.

WHAT IS AXIE INFINITY (AXS)?

Axie Infinity (or “the Project”) is a digital pet universe, inspired by the world famous Pokemon game, where anyone can earn tokens through skilled gameplay and contributions to the ecosystem. Players can battle, collect, raise, and build a land-based kingdom for their pets (known as Axies). Currently, players can start the game by purchasing Axies from other players in the Marketplace.

Axie Infinity is an ERC- utility token that is leading the digital gaming world. It offers significant facets to its platform, such as:

The AXS token is the ERC-20 utility token of the platform and is use for:

IS AXIE INFINITY A GOOD INVESTMENT?

Axie Infinity, currently valued at $4.16B with a mark price of $68, has shown great uprising from its initial launch of $0.17 in just a year. Showing strong user activity and 100x competitive bridge, AXS is best advisable for those seeking a long-term investment.

The AXSUSDT price chart entered an uptrend after the RSI closed above the level-75. Ever since the close above the RSI level-75, the price failed to reach the level-25, an indication that we are still in strong uptrend.

Following the start of the uptrend by the RSI, buying pressure continues to increase on the weekly chart of the AXSUSDT viewed as a price close above bearish inside bar on 18 Jan ’21, and 28 June ’21.

Forming a confluence with another impending breakout of resistance [71.54], we could see an upbeat of the AXS price. 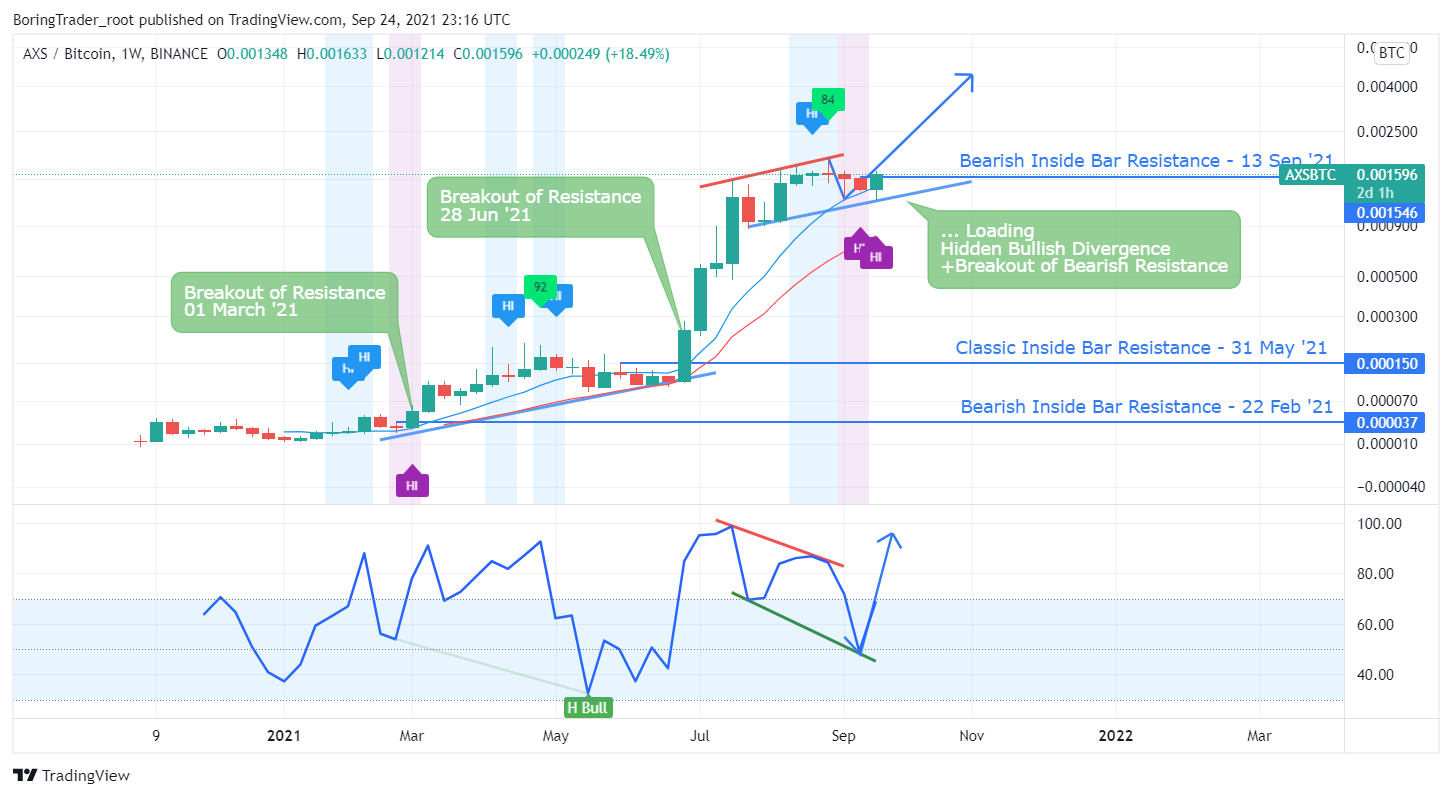 The AXS token has a max supply of 270 million, and about 23% currently in circulation.

One of the ways we measure demand for a crypto project is to pair its token against Bitcoin BTC.

As shown above, the AXSBTC Weekly chart reveals a massive demand for the AXS token compared to Bitcoin, with the bulls breaking through crucial resistance levels.  Also on the chart, is a hidden bullish divergence pattern on 31 May ’21, and a more recent one building up after the 13 September resistance.

Following the project review, fixed maximum supply, and price analysis done so far, we expect the AXS price to skyrocket by about 5X in the long term.

Axie Infinity has had yearly objectives of dual target since 2018. Follow the project roadmap below.

Axie Infinity has quite a few, but good quality partnerships and collaboration with;

Axie Infinity charges a 4.25% fee when players buy and sell Axie NFTs in its marketplace and collecting fees for breeding axies to create new ones. These fees are paid as Axie Infinity Shards (AXS)

For Enjin Wallet, estimated transaction fees are set automatically to allow for a quick transaction. Therefore, they are not fixed like Axie Infinity.

Last, for Decentraland (MANA) the fees aren’t fixed, just like Enjin. Transaction fees on binance shows an exorbitant amount of fees such as 43.0 MANA for a transaction, making Axie Infinity the best among its competitors.

Sunil is a serial entrepreneur and has been working in blockchain and cryptocurrency space for 2 years now. Previously he co-founded Govt. of India supported startup InThinks and is currently Chief Editor at Coingape and CEO at SquadX, a fintech startup. He has published more than 100 articles on cryptocurrency and blockchain and has assisted a number of ICO’s in their success. He has co-designed blockchain development industrial training and has hosted many interviews in past. Follow him on Twitter at @sharmasunil8114 and reach out to him at sunil (at) coingape.com

‘Do not ignore!’: Son highlights early symptom of pancreatic cancer after dad dies

SBF Distances Himself From Alameda Research

'Do not ignore!': Son highlights early symptom of pancreatic cancer after dad dies