A SELECTION of what’s left of the world’s royal dynasties flew in to honour the memory of Prince Philip yesterday.

So if they were happy with the security arrangements, it beggars belief that Prince Harry — sixth in the UK’s royal pecking order and actually the deceased’s grandson — failed to show up and pay his respects.

But as I have suggested before, the security issue could merely be a symptom of Harry’s ongoing resentment at being cast aside as a royal irrelevance.

After all, being stripped of all your duties when you’ve made it clear you want to stay involved in some way must have hurt.

For him, it wasn’t just about royal protocol. It was about family.

Consequently, oh to be a fly on the wall in the Sussex’s Montecito mansion when William and Kate’s visit to Jamaica started to go a little papaya-shaped. 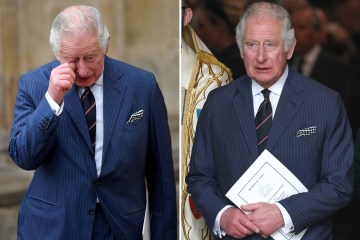 After all, when Harry and Meghan first decamped from the UK to the US, hadn’t they pledged to carry on representing the Queen by showing devoted duty to the 54 nations of the Commonwealth?

But “Granny” — acting on the advice of the “grey men of the Palace”, as Princess Diana used to call them — ended that dream by stripping the couple of their positions as President and VP of The Queen’s Commonwealth Trust.

And after quitting as a senior royal, Harry was forced to relinquish his position as Commonwealth Youth Ambassador too.

That must have stung.

In July 2020, while still in his role with the QCT, Harry told young leaders: “When you look across the Commonwealth, there is no way we can move forward unless we acknowledge the past.”

This was something his brother William attempted to do in Jamaica last week when he expressed “deep sorrow for the transatlantic slave trade” after Prime Minister Andrew Holness had pretty much thanked them for their efforts while suggesting the country wouldn’t be requiring their services for much longer.

It was yet another jarring moment in a tour that, despite William’s and Kate’s best efforts and obvious popularity, wasn’t the unqualified success the Palace might have hoped for.

William’s military regalia while standing atop a Land Rover was deemed by some to be old-fashioned and out of touch, while the couple clasping the hands of excited children through a metal security fence also attracted criticism.

No matter that the fence has been there for years and Jamaican-born Manchester City footballer Raheem Sterling had done the same thing with little or no opprobrium rained on his head.

The burning question is: If it had been Harry and Meghan in Jamaica, would the outcome have been different?

The answer, I believe, is yes.

As shown during Harry and Meghan’s successful, ten-day visit to South Africa in September 2019, the couple redefined royal tours by eschewing the pomp and ceremony of old and adopting a more modern outlook, perhaps summed up by Meghan hopping on to a tree stump to tell women in the Nyanga township: “May I just say that while I am here with my husband as a member of the Royal Family, I want you to know that for me, I am here as a mother, as a wife, as a woman, as a woman of colour and as your sister.”

The crowd went wild and one can only assume that had she and Harry adopted the same approach on a tour to Jamaica, the reaction may well have been the same.

Barbados replaced the Queen as head of state last year and there is little doubt that now Jamaica will follow suit.

Would Harry and Meghan’s wish of representing the Queen around the Commonwealth have changed that?

Probably not, but maybe their fresher approach might have persuaded Jamaica to press pause on its public declaration until after Her Majesty’s death?

Hindsight is a wonderful thing and we’ll never know for sure.

But one thing is certain. If the Sussexes had been kept under the royal wing in the Commonwealth role they asked for, then the Cambridges could happily have stayed home with the kids, Harry would still feel wanted and the Royal Family might not be as fractured as it is today.

Rebel has cause to be thankful Will was not in

REBEL WILSON must be thanking her lucky stars that Will Smith was unable to fly to the UK for the recent Baftas.

Otherwise, when she made her gag about his and wife Jada’s supposedly open marriage, who knows how he might have reacted?

No doubt his apologists will now be mitigating: “Oh, he would never strike a woman”.

But the bottom line is you shouldn’t assault anyone for making a joke at your expense – however bad taste it was.

Will is, by all accounts, a charming and funny man who could easily have walked on stage, grabbed the microphone from Chris Rock and taken him down with a biting remark.

Instead, it was an uncontrolled outburst of violent rage that, had it been Joe Bloggs in a nightclub, would have resulted in his immediate expulsion from the building and possible arrest.

In fact, the courts are full of people charged with similarly aggressive behaviour.

That it was a Hollywood star committing assault on a global stage should make no difference at all.

After all, aren’t we all supposed to be equal in the eyes of the law?

BORIS BECKER claims he has “forgotten” where nine of his championship tennis trophies and medals are.

Becker, in court on charges under the Insolvency Act, says the items – which bankruptcy investigators spent months trying to locate – were not of “great value” to him.

Hmmm. In my time I have misplaced or lost my house keys, a mobile phone or two, car fobs and about 475 lipsticks.

If, of course, I had won them in them first place.

You ab to be joking

APPARENTLY, the latest fashion trend will cost you nothing.

Well, except for blood, sweat, tears and maybe a gym membership.

It’s the toned midriff, currently being displayed by various Hollywood A-listers in their crop tops.

Thanks, but I think I’ll stick to voluminous kaftans.

In fact, I laughed so hard at the thought of exposing my midriff that my tummy muscles got the best workout they’ve had since I was forced to lift a medicine ball in the school gym.

Why so cross, mum?

THE top 25 typical things mothers say to their kids include timeless classics such as, “I want never gets” and, “I’ve got eyes in the back of my head”.

Perhaps unsurprisingly, noticeably absent was my own dear mother’s assertion that, were I careless enough to step in the road and get knocked over by a car, she would: “Shout at me all the way to the hospital.”

AUTHOR Josh King reckons the first rule of political photo ops is “never put anything on your head”.

Perhaps we should now extend this warning to feet too – in particular the £335 designer trainers sported by Chancellor Rishi Sunak shortly after posing with someone else’s budget car at the petrol pumps.

A political mis-step whichever way you look at it.

‘There when they need you’

UKRAINE’S President Volodymyr Zelensky has praised the UK’s response to the crisis while singling out France for criticism, saying it seemed “afraid of Russia”.

As a politician once wryly observed to me: “The French – always there when they need you.”

A recipe for bad dinners

CLEM JOHNSON, 24, from Liverpool, posts photos of his mum’s cooking with captions such as: “The single worst meal I have ever consumed . . . ”

So here’s a radical thought, laddie.

Get your lazy backside into the kitchen and cook something for yourself.

Alec and Hilaria Baldwin are expecting their 7th child

Alec and Hilaria Baldwin are expecting their 7th child