Movie reviews: ‘No Time to Die’ is a James Bond film unlike any other

Will James Bond (Daniel Craig) ever be happy? The dour superspy looks great in a tux, has saved the planet a dozen or more times and piloted invisible planes, but despite his list of achievements, true happiness always seems to have eluded him.

In “No Time to Die,” however, it looks like Bond may have found a sweet spot in his life with his pretty love interest, Dr. Madeleine Swann (Léa Seydoux). But Craig’s fifth and final time as 007 isn’t all sunshine and roses as much as it is a requiem for a character who was shaped by trauma.

“No Time to Die,” now only playing in theatres, kicks off with a cold open unlike any other Bond beginning. Two decades ago, against a remote, icy Norwegian backdrop, the young daughter of a Spectre agent is orphaned when a masked murderer invades her home.

“Your father killed my entire family,” he says between bullets. She survives, and twenty or so years later grows up to be Dr. Swann, psychotherapist and the only woman who can make James Bond smile.

On holiday in Materna, Italy, she encourages him to visit the grave of heartbreaker Vesper Lynd, and put her memory to rest. He does, and soon the idyll with his new girlfriend ends, literally blowing up in his face.

Convinced Swann has betrayed him, the superspy cuts her loose, vowing to never lay eyes on her again.

Cut to five years later. Bond is retired from MI6, but lured back into the game of international espionage when his friend and CIA field officer Felix Leiter (Jeffrey Wright) and associate Logan Ash (Billy Magnussen) ask him to help locate Valdo Obruche (David Dencik), a missing scientist working on a deadly DNA Nanobots weapon.

The job sees Bond square off with one of his greatest foes, Ernst Stavro Blofeld (Christoph Waltz) and revenge-thirsty terrorist Lyutsifer Safin (Rami Malek), a master in the art of asymmetric warfare.

“No Time to Die” shakes up the Bond formula while still offering most of what fans pay to see. There are exotic locations, some high-flying action and the odd 007 one-liner. They are embedded into the DNA of the franchise; character traits that have not been genetically edited out of the movie.

The womanizing, which was so much a part of the Bond folklore, is still there, but trimmed, and played for comic effect. In one instance Ana de Armas, whose appearance as CIA agent Paloma amounts to an extended cameo, charmingly closes the door on that aspect of the Bond legend. In a short but eventful scene, she almost steals the show, and leaves the audience wanting more.

What director Cary Joji Fukunaga, who co-wrote the script alongside Neal Purvis, Robert Wade, Phoebe Waller-Bridge and Scott Z. Burns, has done is add in a ponderous reevaluation of Craig’s years as Bond.

Call backs abound to “Casino Royale,” “Quantum of Solace,” “Skyfall,” and “Spectre” and loose ends are tied into bows in in the film’s many Easter eggs. Much of that material is fan service as the fifteen-year Craig reign comes to a close. A shot of M’s (Judi Dench) portrait nods to Bond’s connection to her and Fukunaga reaches back to “Casino Royale” for a tribute to Felix “Brother from Langley” Leiter (Jeffrey Wright). It feels like a nice, respectful way to usher out one era and bring in the next, in whatever form that may take.

But “No Time to Die” is not simply a tip of the hat to the past. With an eye to the future, Fukunaga and Craig have fundamentally changed what a Bond movie is. As the only Bond actor to have an arc for his character, Craig didn’t simply put on Pierce Brosnan’s tux and carry on as so many of the previous actors have done. He took Bond to places he’s never been before, amping up the emotionality of the character as a person born out of trauma. He talks about having everything taken from him as a child, “before I was even in the fight.”

For the first time in Bond history, 007 is feeling the ticking of the clock, and not the timer on a bomb he’s trying to diffuse, but the metaphorical hands of time tightening around him.

This approach effectively changes “No Time to Die’s” dynamic, from action film to soul-searching character drama. The 163-minute running time allows the characters to explore why and how they landed where they did in life, but it also sucks much of the urgency from the storytelling. Add to that Malek’s Safin, a clichéd villain who really should make a larger impact, and the drama necessary to shake that martini is lessened.

There is #NoTimeForSpoilers in this review, but suffice to say, “No Time to Die” is a Bond film unlike any other. Craig leaves the franchise having made the biggest impact on the character since Sean Connery set the rules more than half a century ago. His finale is drawn out and may rely too heavily on pop psychologically, but it’s an important film in the Bond canon.

It may even be the most important and exciting since “Dr. No.” Why? Because, as an on-screen card promises, “James Bond will return,” but the movie gives us no hint as to what that re-invented future will entail and that, after almost sixty years of a steady diet of 007isms, is “No Time to Die’s” most exciting achievement. 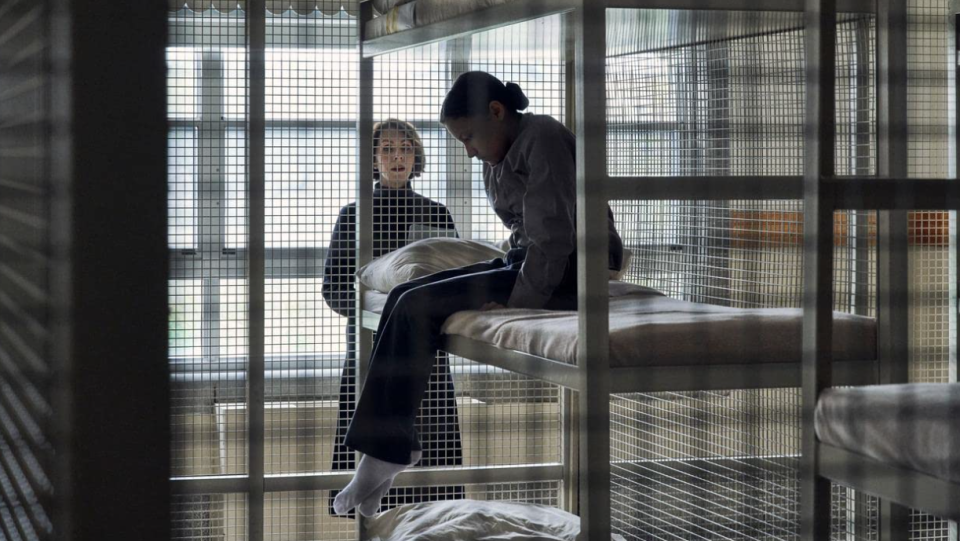 “Night Raiders,” a new drama from Cree-Métis filmmaker Danis Goulet and now playing in theatres, draws on the historical horrors of the Sixties Scoop and Residential Schools to create an unforgettable, dystopian scenario set in the near future.

Set in a war-ravaged North America, society has crumbled and cities are now run by the military. All children are property of the state. Forcibly removed from their families, these children are housed in state “education academies.” Laws are enforced by killer drones and heavily armed soldiers, who execute parents for hiding their children.

Cree mother Niska (Elle-Máijá Tailfeathers) hides her daughter Waseese (Brooklyn Letexier-Hart) in the woods successfully until an injury forces them to go to the occupied city for medical treatment.

Cut to one year later. Waseese is now in a reeducation facility as Niska joins with a group of Indigenous rebels called the Night Raiders, with the hope of freeing Waseese and the other inmates of the “children’s academy.”

“Night Raiders” effectively paints a somber portrait of totalitarian future, packed with foreboding and danger. The story is fictional but resonates with echoes of the ugly truths of colonization and forced assimilation. Goulet allows the viewer to make the comparisons between the real-life atrocities and the fictional elements of the story. There are no pages of exposition, just evocative images. Show me don’t tell me. The basis in truth of the underlying themes brings the story a weight often missing in the dystopian genre.

“Night Raiders” is at its best when it walks its own path. The allegory at its heart is strong and heartbreaking and gives the movie its gut punch. Less effective are the more traditional elements that feel like they snuck in from other sci-fi stories.

Still, it packs historical relevance against a story of the resilience of the Cree people, while establishing Tailfeathers as a new kind of action hero—kind yet fearless—and avoiding most of the easy cliches of other apocalyptic movies.

THERE’S SOMEONE INSIDE YOUR HOUSE: 2 ½ STARS 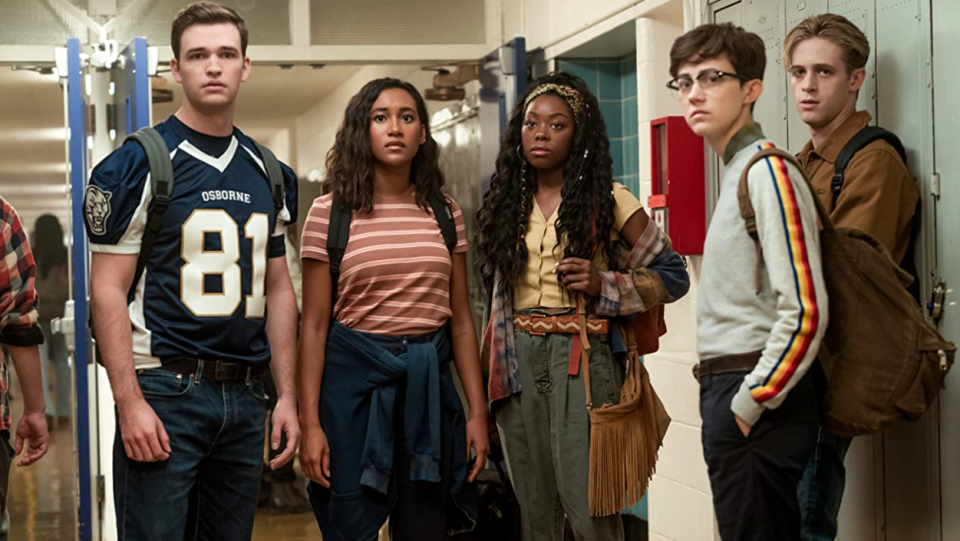 “There’s Someone Inside Your House,” now streaming on Netflix, throws a Halloween assortment of slasher movie standards together, like good looking teenagers with dark secrets and a masked killer, to tell a story that falls somewhere on the Creep-O-Meter between “Scream” and “I Know What You Did Last Summer.”

Based on the Stephanie Perkins young adult novel, the story focusses on Makani Young (Sydney Park), a Hawaiian teenager who moved to a small Nebraska town to live with her grandmother after a traumatic incident at her old school.

At Osbourne High she is just one of a large group of kids harbouring shady pasts. The bloody, brutal murder of football star Jackson (Markian Tarasiuk) rocks the school, revealing a masked killer on the loose who exposes his victim’s darkest moments before offing them. And get this, the killer wears a 3-D printed mask of his victim while they do the dirty deed.

As the bodies pile up, Makani and her pals—imagine a modern day “Breakfast Club” comprised of astrophysicist Darby (Jesse LaTourette), a pill-popping smart aleck (Anthony Timpano), Zach, the son of a local farming magnate (Dale Whibley), Makani’s ex (Théodore Pellerin) and the kind-hearted Alex (Asjha Cooper)—investigate, hoping to end the killing spree before the killer ends their lives.

“There’s Someone Inside Your House” starts strong with the gruesome killing of the football star. It establishes the movie’s “the bloodier the better” attitude but while the killings continue, director Patrick Brice is more interested in the shocking secrets of the characters than their deaths. Sure, there are horror movie settings like corn mazes and long, dimly lit corridors, but Brice wants us to see the darkness of the characters, which is often hidden just under well-manicured surfaces. A perky high-school student council president, for instance, is revealed to be a closeted racist in a rather spectacular manner.

But, despite the sociological look at the lives and deaths of its characters, the film may have worked better, however, if we cared more about the people on screen. There are reveals, but Brice doesn’t allow the teen relationships to blossom, or the characters to create individual personalities. We get to know about Makani and her life, but her friends are all out of Central Casting.

“You have no idea who I am,” the killer says when revealed. “You don’t even know who you are.” And, unfortunately, neither does the audience.

Brice attempts to drag “There’s Someone Inside Your House’s” throwback genre into the present with a mix of old-school thrills, modern cultural norms and a killer who takes the term “cancel culture” a bit too seriously, but never quite gets there.

REVIEW | Love, loss and everything in between: A gut-wrenching farewell for Netflix’s Dead To Me | Life