Scientists, farmers team up to save one of SA’s most threatened fish | Fin24


Decades ago, before large numbers of alien predatory fish were introduced to South African waters, an unusual event would occur in some of the rivers of the Western Cape.

As spring broke after good winter rains, rivers in the Olifants/Doring river basin would turn “black” as waves of migrating sandfish headed upstream to spawn.

A yellow/greenish fish with a pronounced overbite that can grow to about 60cm, the Clanwilliam sandfish is one of South Africa’s most threatened migratory freshwater fish.

Having disappeared from the Olifants River where it was formerly abundant, it survives only in the Doring River and some of its tributaries.

Here it battles black bass and bluegill – fish introduced from the US in the late 1920s for sport fishing. And it’s a battle the sandfish appears to be losing.

Dr Jeremy Shelton and his colleagues started the Saving Sandfish project* and have been studying this elusive fish for the past five years.

What they found is a small population of migratory sandfish clinging precariously to life in the Doring.

Bass and bluegill weren’t the only dangers the fish faced.

Otto Whitehead – the creator of the Saving Sandfish web series, assists with a sandfish rescue in November 2020.

While the Doring River holds water year-round, many of its tributaries now dry up in summer. And the headwaters of these rivers – where sandfish go to spawn, have become choked with alien vegetation such as black wattle.

Shelton, a scientist at the Freshwater Research Centre, said the first challenge he and his team faced was tracking down sandfish.

When the Saving Sandfish project started back in 2018, there hadn’t been any survey data for over a decade.

To get a handle on current populations, they netted fish in the Doring.

What they found was alarming.

“The majority of our catches were dominated by North American species,” he said. “These predatory fish are really, really good at feeding our native species.”

In the Doring’s tributaries, a similar story played out. Catches showed large numbers of bass, except where obstacles such as waterfalls created natural “bass barriers”.

Having located the fish, Shelton needed to know where and when they reproduced.

His team found that while some sandfish stay in the same section of a river all year – such as areas between waterfalls – most still migrate, making their way into tributaries like the Biedouw and Oorlogskloof to lay their eggs.

While adult sandfish are too large for bass and bluegill to eat, these predators hoover up the small fry.

“I have witnessed how bluegill were eating baby sandfish in a tributary of the Doring River where a few adult sandfish still spawn some years, when there is sufficient water for them to migrate upstream and spawn,” said Dr Leonard Flemming, a microbiologist and avid fly fisherman.

Flemming said it was “sad and infuriating” to see how alien fish rapidly destroyed sandfish offspring.

The worst part of the scenario, he said, was that bass and bluegill were filling the tributaries of the Doring, even though no one was actively fishing for them there.

For the newly hatched sandfish that survive predation by bass and bluegill, a changing climate means pools that once sustained them year-round now dry up in the summer months.

The net result is that instead of a nursery, tributaries like the Biedouw and Oorlogskloof had become sandfish death traps. And sandfish needed to be helped immediately. “We were quite worried that the species is going to go extinct very soon, because there were so few in the wild and so little recruitment coming through.”

Shelton and colleagues have collected thousands of newly spawned sandfish and released them into farm dams and ponds that have been cleared of alien predatory fish.

Without the support of farmers and local community members, the rescue effort could not have worked, said Shelton.

Out of reach of bass and bluegill, sandfish can grow up in the type of nursery conditions that once existed in pools in the Biedouw and Oorlogskloof.

“Once they’re big enough to be what we call ‘bass-proof’, we put them back into the wild which will hopefully boost their population numbers,” he said.

Some 1 300 sandfish from the nursery dams have been released back into the river, and fitted with tiny microchips that are harmless to the fish but allow scientists to track their movements.

Shelton says that, this spring, researchers will, for the first time, be able to see whether these “reared and released” fish join the remaining wild adult sandfish to spawn in the tributaries. 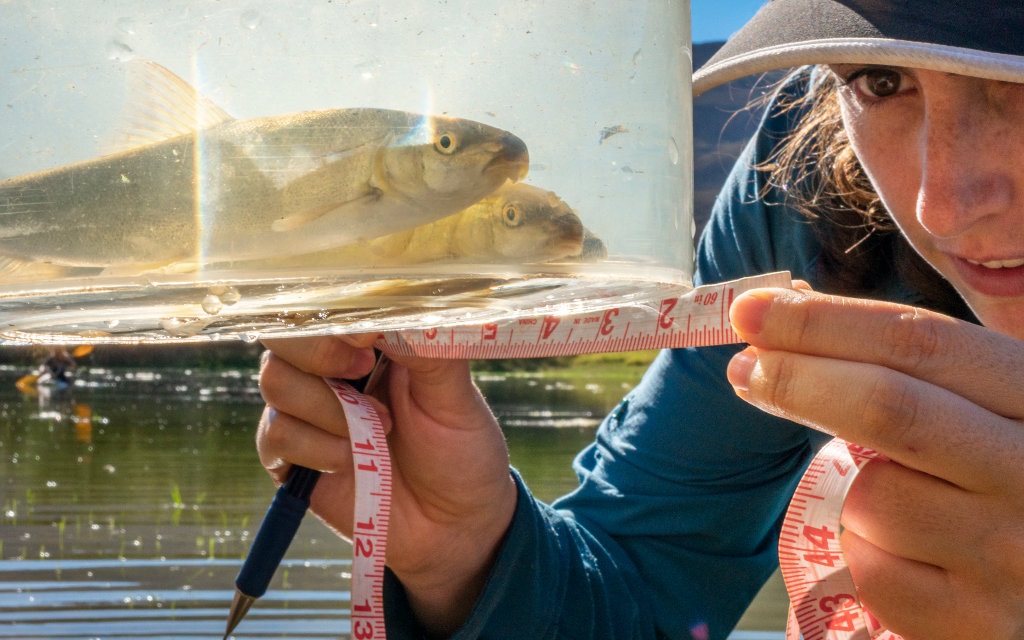 Adult sandfish migrate into the Biedouw River to spawn in Spring.

“What we’re really hoping is that those fish are going to return to the Biedouw river to spawn and contribute to the migrating population.”

And he wants the help of South Africans.

By taking pictures of fish seen in the Olifants and Doring catchments and submitting them to the iNaturalist app, South Africans will be able to give scientists a better view of the sandfish populations.

Your subscription helps us continue bringing you stories that matter. Become a News24 subscriber today for only R75 a month. Cancel anytime.

– Anyone wishing to donate to the project can do so here.

Do you have a good news story you want to share? E-mail feelgood@news24.com

'Not like anything else in Vancouver': Realtors seek owner who will appreciate house designed to look like ship

Biden cheers jobs gains, says Americans getting back to work after COVID crisis