Social inequality and hyper violence: why the bleak world of Netflix’s Squid Game is a streaming phenomenon | Channel


Squid Game, an original Netflix drama produced in South Korea, is a streaming phenomenon. Released on 17 September, within two weeks the series has become the most watched Netflix title in 76 countries, including the US, Australia and South Korea.

Across nine episodes, desperate people enmeshed in debt voluntarily participate in a sequence of six sadistic and lethal survival games. The prize for the winner is 46.5 billion won (around A$50 million). At the outset, the 456 participants are unaware there is a twist. There can only be one winner — and the rest of the contestants will die along the way.

This outcome is foreshadowed for viewers in a segment that precedes episode 1, in which two groups of children are seen playing the eponymous Squid Game (essentially a violent game played by Korean schoolboys). The groups struggle for possession of a squid-shaped area drawn on the ground. Both attackers and defenders must resist being pushed out of the play area, for, according to the commentary, if you are pushed out you “die”.

Such games are commonly metaphors for life experiences. Games structured as a struggle for possession, or with the goal of overcoming a player in a position of control, are often stories about social aspiration and limited social mobility.

In the survival game played in episode 1, Red Light, Green Light (also known as “Hibiscus flowers have bloomed” in Korea and “Statues” elsewhere around the world), players can win if they can creep forward when the controlling figure’s back is turned. If seen to move, they are “eliminated” (and in this case, die).

The brutal adaptation of children’s games at the centre of Squid Game have clearly captured the imagination of the show’s viewers, and also provide a startlingly evocative metaphor for socio-economic inequality and capitalism.

Television drama frequently portrays Korea as a profoundly unequal and violent society. Its traumatic history throughout most of the twentieth century — Japanese colonisation, the Korean War, almost 40 years of military dictatorship, and financial crises — has left deep psychological scars on the national psyche.

Dark political narratives in TV and film continue to express the social impact of that history, such as the recent Netflix zombie series, Kingdom (2019–2021), along with D.P. (2021), Signal (2016) and Stranger (2015). The economic gap within Korean society is ever widening, and has become a recurrent motif in TV drama.

This unequal society is a staple of “Cinderella” stories in which protagonists are displaced into poverty and abused by those with wealth and power until they regain their place. It is also reflected in dramas about the super-rich such as Sky Castle (2018) and The Penthouse (2020-2021), which show how ultra-wealthy Koreans maintain their control over the country’s wealth.

Socio-economic inequality in Squid Game is explored through the often heartbeaking narratives of the contestant’s economic stress. These are shown to be often compounded by Korea’s lack of a social safety net and unregulated financial structures.

Employment in underclasses is precarious: chief protagonist Gi-hun (Lee Jung-jae) has been retrenched, has amassed gambling debts, cannot afford lifesaving surgery for his mother, and has tried to solve his financial problems by borrowing from loan sharks.

Television dramas widely depict this latter practice as a blight upon society: interest rates are extortionate and borrowers easily slip into a form of modern slavery through ever increasing debt.

Effective slavery is also depicted in Squid Game in the exploitation of North Korean refugees and South Asian migrant workers, often by other underclass members.

Squid Game participants who question their commitment to the violent game are warned by those in control that because of their poverty or level of debt they will be much worse off in the world outside. Episode 2, Hell, is a realistic account of the precarious life of marginalised people, and the motivations that drive them into the perilous game. 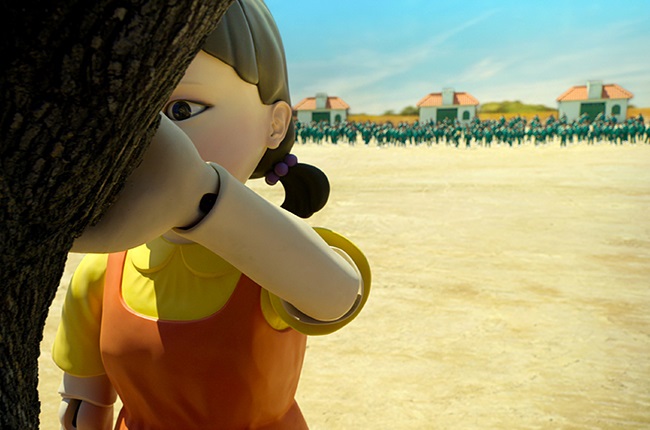 A scene in Squid Game.

The popularity of Squid Game

The global popularity of Squid Game can be attributed to various factors.

First, it draws on a worldwide cultural obsession with game shows, from quiz shows where winners hope to make a fortune to reality television programs such as Survivor.

As the participants wake on their first morning in their huge dormitory, the soundtrack rather comically consists of Haydn’s triumphalist Trumpet Concerto, which was previously used as signal music in a popular Korean quiz game titled Janghak Quiz (1973-1996).

Squid Game also includes a level of violence characteristic of western cinema but rare in Korean TV drama. It forms a potent metaphor for a deep social malaise.

The series also contains a lot of black comedy and even schadenfreude. There is a humourous contradiction between events on the screen, and the romantic music of the soundtrack.

For example, the ominous preparation for the first game, including passage along an Escher-inspired staircase, is accompanied by Johann Strauss’s Blue Danube waltz. Having forgotten his daughter’s birthday, Gi-hun gets her a mystery present which turns out to be a cigarette lighter in the shape of a gun. The moment when she opens her present is both very funny and heart-wrenching.

Finally, the series is a high-quality production. Its visuals are strong and it builds suspense very effectively. Such elements temper what otherwise might seem heavy-handed social critique.

The success first of Parasite and now of Squid Game is bringing Korean film and media into the international limelight in an unprecedented way.

Hwang Dong-hyuk, director of Squid Game, had to wait 12 years to find a backer for his script. He has been a highly successful film maker, known for Dogani (2011) and Miss Granny (2014), and currently seems to have his sights set on a return to the large screen. Perhaps he can be persuaded otherwise?

This article is republished from The Conversation under a Creative Commons license. Read the original article.

Feast and famine for Disney at Thanksgiving box office