WHEN Emma Raducanu abandoned the match she was losing at Wimbledon this year, I sided with John McEnroe and told anyone who’d listen that she was obviously just another snowflake teenager who was so used to getting her way she couldn’t cope when things started to go wrong.

Ha. Not since Neville Chamberlain waved his piece of paper around has anyone been so wrong. Because after Emma’s remarkable US Open triumph in New York there can be no doubt that she’s got a spine made from titanium and nerves of steel.

Snowflake? She wouldn’t melt if you put her in a furnace.

There’s more. too, because when she sat there after the match and the crowd were singing Sweet Caroline and she joined in, beaming, I just sat there thinking: “Wow. She’s great.”

And now can we hold that thought, because in the coming weeks and months, that poor girl’s going on a rollercoaster, and she can’t even begin to imagine how awful it will be.

First of all, her school friends, who are now doing internships in shops for 5p a week, will have noted that she trousered £1.8million for the win and maybe the same again for various sponsorship deals.

So they will reckon she won’t want to join them for a game of darts at the Dog And Duck any time soon.

Worse, Emma was seen at the Met Ball, amongst all the orange people of Hollywood. So her old mates will have it in their heads that her phone is now rammed with George Clooney’s number and that she’ll be too busy with the Kardashians to spend any time with them.

It’ll be tricky, then, for the poor girl to keep her friends, especially when she is being papped all the time. Which is going to happen, sure as eggs.

Then she’s going to have the problem of unscrupulous boyfriends and the boredom of waiting around to spend the evening with people she doesn’t know. Or like.

And then one day she’ll be flustered and in a hurry and she’ll have to tell a fan she can’t stop for a selfie.

Which means she will be labelled on social media as a “cold, hard bitch”. Then she’ll give an interview and something she says will be taken out of context.

After this will come the inevitable about face. It happens, always.

We start out loving a sportsperson. We label them a national treasure and urge Mrs Queen to ennoble them at the earliest possible opportunity.

And then, all of a sudden, we decide we hate them and want them to fall in a hole.

She may have the nerves to win a Grand Slam tennis tournament but she’s going to need more than that to cope with fame’s apocalyptic downsides.

So let’s promise ourselves, here and now, that we won’t let it happen. Let’s bottle that Sweet Caroline moment at Flushing Meadow and remember it.

So that even if she launches herself, one day, in a meth-fuelled assault on a member of the crowd, in the two-footed style of Eric Cantona, we will still put our arm around her shoulder and give her our support.

We didn’t build her up. She did. And so it’s not our job, ever, to pull her down.

IT’S very obvious that the whack Lewis Hamilton took to the head when Max Verstappen’s Red Bull landed on it last weekend, below, was bigger than we feared. Because he turned up the next day in New York, at the Met Ball, wearing a suit and a wedding dress. 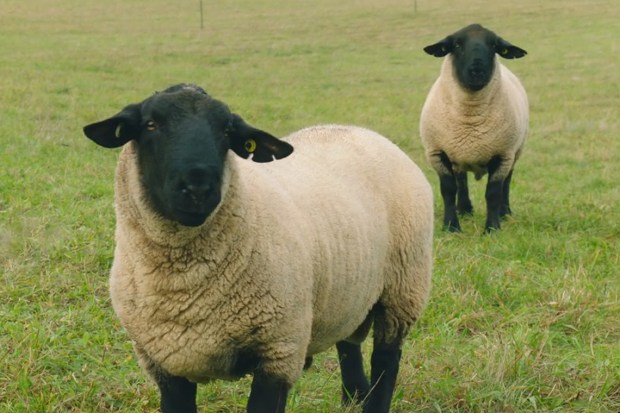 I HAVE received an annoying enquiry from a reporter, wondering if I am possibly a money-grabbing b*****d.

The problem is that I’m charging £126 for a box of lamb that contains one whole leg, one whole shoulder, 12 loin chops, four chump chops, one neck fillet and 12 sausages, flavoured with garlic and rosemary.

The actual cost of producing each of those lambs was £508.

And that doesn’t include a penny for the endless nights I spent in the lambing barn, with my hand up a sheep’s a***, trying to keep on top of everything.

Nor does it include the cost of replacing Wayne Rooney, the ram, who died.

Therefore, my message to the reporter is: Why don’t you continue to fill your face every night with a Subway and understand that in farming, absolutely no one is getting paid too much.

I can promise you that.

Thick as a brickie

SLEEPY Joe Biden has been quizzed on how he feels about inappropriate behaviour in the office and this, word for word, is what he had to say.

“Well by the way, I did. I understand. We have. There’s so much more work to do to figure out how. The one bimportant thing I know. Well I I I I tell you, what to deal with. I did not um that um what I didn’t want to do um and I didn’t.”

Seriously, it’s easier to understand what Gerald the dry stone waller is on about.

I NEEDED some new light fittings for the kitchen in the house I’m building so this week I went to a part of London where there are many lighting shops.

I’d go into one, look round, find nothing I liked, then go into another, and another and so on until, eventually, I went into one place where I walked around, looking at all the lights hanging down from the ceiling, and the staff looked at me as though I might be mad.

It was only after I walked out that I realised I’d been in the office of a shipping company.

WELL there we are. The Home Secretary has announced that she will give the Border Force jet skis to stem the vast tide of immigrants flooding across the Channel every day.

I can see that this is good news for the Water Police, who’ll have great fun whizzing around all day in a blizzard of noise and spray.

But will it work, I wonder?

The problem is that these immigrants have escaped the clutches of the mad men in their towns and villages and fled across the border, and then across deserts and seas, past security patrols and minefields, before getting all the way across the EU, while saving every penny they have so they can buy a space on a small rubber dinghy in Calais.

And what? They’re going to encounter an overweight chap called Bob on a beach toy and think: “Oh well, that’s it. I may as well go home.”

I don’t think so.

IT’S plain the Americans want Prince Andrew in America. So why don’t we do a deal and swap him for that awful woman who mowed down a young motorcyclist in Northants and then rushed back to the States saying she worked for the CIA?

US Open champ Emma Raducanu, 18, rubs shoulders with JLo and Megan Fox at Met Gala as she swaps A-Levels for A-Listers

A look at the 5 abandoned cricket tours | Sport

OPINION | Climate-proof our schools: Treasury and Department of Basic Education must do more | News24

A look at the 5 abandoned cricket tours | Sport