WILLIAM and Kate’s awkward royal tour of the Caribbean could have been a roaring ­triumph . . . if Harry and Meg had done it instead.

If only the Palace had just slapped some factor 50 on Harry’s bald spot and told Meghan she was about to play the role of a lifetime.

That royal yacht has sailed, of course. Harry and Meghan will — disgracefully — not even attend Tuesday’s memorial service for Prince Philip at Westminster Abbey.

Imagining them doing a gruelling meet-and-greet all over the Commonwealth is just a crazy dream.

But seeing William and Kate looking uncomfortable in the Caribbean was a reminder of the historic opportunity that has been lost for ever.

William and Kate did their very best. But the bitter truth is their Caribbean tour would have been a perfect gig for Harry and Meghan. 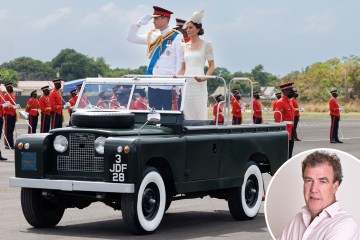 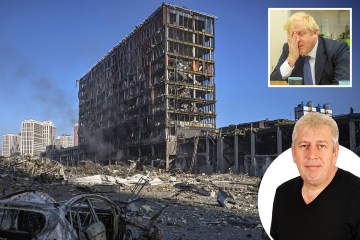 Woke yet glam, caring yet charismatic, their eyes shining with compassionate tears, Harry and Meghan would have been living, multi-racial proof the Royal Family are not some milky white leftover from ancient history.

William and Kate smiled from one end of the Caribbean to the other. Wills quoted Bob Marley — twice!

They were game for a laugh, shaking their royal rumps whenever the band began to play.

William expressed “profound sorrow” about slavery. They listened politely when Jamaica’s mediocre Prime Minister Andrew Holness gracelessly told them he was planning to ditch the Queen as head of state.

Many locals clearly adored William and Kate. But the uneasy truth is this tour of the Caribbean felt just a bit off.

The most obvious — and offensive — example was Jamaican politician Lisa Hanna openly humiliating the Duchess of Cambridge.

During a ceremony to welcome William and Catherine at ­Kingston’s Norman Manley International Airport, Kate turned to smile at Ms Hanna, who was ­sitting next to her, and the ­former Miss-World-turned-politician angrily looked away, as if lovely Kate was dressed as a grand wizard in the Ku Klux Klan.

They lapped up the snub in Hanna’s People’s National Party.
But it looked ­gratuitously, pathetically rude.

Hanna would not have dared treat Meghan Markle in such a wantonly disrespectful manner. Or indeed the Queen.

Kate and William are glorious ambassadors for this nation. Personally, I would love to see the succession skip a ­generation and have William on the throne rather than King Charles III.

But William and Kate were faced with an impossible task when confronted by self-important, self-serving Caribbean politicians trying desperately hard to show how little they care for the monarchy.

By all means let’s have a mature ­conversation about the Crown’s relationship with Commonwealth nations. And if Jamaica wants to follow the example of Barbados and remove the Queen as head of state, good luck to them.

But let’s be civilised. And let’s cut the endless demands for this country to shell out reparations for slavery.

William — following the example of Prince Charles — made a speech about the obscenity of slavery.

Fine, but can we stop pretending that slavery only existed when European colonialists were stealing people from Africa? Ever heard of the Roman Empire?

When did anyone ever demand reparations for the millions of slaves taken by African, Arab and Scandinavian nations?

How about some fleeting mention of the way the British — and our Navy — did so much to ABOLISH slavery?

What a crying shame that the Duke and Duchess of Sussex sit bleating in their mansion, fondling their lucrative contracts, whining the Californian day away when they could be securing the Queen’s legacy in the Commonwealth.

When they married on that spring day in Windsor in 2018, there was a sense that this couple could change the world.

But in a sulky fit of self-pity, Harry and Meghan threw it all away.

Now they sit ­surrounded by all that useless luxury, spouting their woke ­banalities, nurturing their grievances.

What a waste, and what a lost ­opportunity. For them — and for us.

RUSSIAN video journalist Oksana Baulina has been killed by Russian shelling in Kyiv.

Oksana is believed to have been the victim of a Russian “double tap” attack, a sadistic tactic perfected in the bloody ruins of Syria where a target is attacked twice in quick succession – the first bomb to wipe out the target, and the second to kill those people who rush to help.

Oksana was a foreign correspondent in Ukraine, where her speciality was the grotesque corruption of the Russian government.

Oksana was an unimaginably brave woman who sacrificed her life to tell the truth about the criminals who have hijacked her homeland.

Her death is a reminder that the Russian people are not our enemy.

OVER the past week, a number of raddled Rolling Stones fans have fixed me with their rheumy eyes, tightly gripped their Zimmer frames and asked: “Is it worth buying tickets to see the Stones this summer?”

Turning the dial on their hearing aids all the way up to ten, I reply in the affirmative.

It’s true there will be no Charlie Watts. But this is the band that survived losing its founder, Brian Jones, who died at age 27.

The band who survived losing Mick Taylor and Bill Wyman.

Mick Jagger and Keith Richards both turn 80 next year.

This summer’s Stones shows will be magic. But this really could be the last time.

Not everybody can work from home

ON the second anniversary of lockdown, a poll suggests that the typical worker now has a hybrid working week of three days in the office and two loafing around at home in their jim-jams.

Working from home is, and always will be, a class issue.

Only the pampered Covid elite gladly get to do it – and then whine that the service they provide can’t possibly be anywhere as good as pre-Covid.

WFH is a new way of working – not working very much at all, but still getting paid for it.

SOME say that Emma Raducanu has more sponsors than trophies.

It’s true that Emma has only one major trophy – that US Open – but multiple high-end contracts with Tiffany, Dior, Evian, British Airways and, most recently, Porsche.

But to most casual British tennis fans, the one tournament that matters is those two weeks at Wimbledon.

If Raducanu wins Wimbledon, then the sky is the limit.

Emma, 19, might be able to afford the insurance on her Porsche.
And even fill it up!

Too late for US regrets

THE United States of America expresses outrage that the Taliban have again closed schools in Afghanistan to female students.

But if President Biden had not been so desperate to flee the country, girls would still be getting an education in Afghanistan.

LET’S not get our organic Fairtrade knickers in too much of a twist about football’s 2022 World Cup being held in Qatar.

The last one was in Russia, in 2018. And I can vividly recall French President Emmanuel Macron dancing like a drunken Crazy Horse showgirl at the final.

None of it seemed to bother Macron when the teenage Kylian Mbappe banged in France’s fourth goal against Croatia.

We are rightly appalled that even as the cities of Ukraine are reduced to rubble, Russia has dared to make a bid to host football’s Euro 2028 tournament.

But it is not as though we did not know Russia’s true nature four years ago.

That 2018 World Cup was held in Russia just four years after the country had illegally annexed Crimea.

That World Cup began less than FOUR MONTHS after Russian hitmen had descended on Salisbury and poisoned Sergei and Yulia Skripal with nerve agent Novichok – a botched assassination attempt that killed a British innocent and put a policeman into an intensive care unit.

The 2018 World Cup in Russia was held when we already knew that Russia was a corrupt, brutal, genocidal regime that believed they could, quite literally, get away with murder.

So, by all means let Harry Kane and the England boys express their legitimate concerns about gay football supporters feeling safe in Qatar.

If course, the caring footballers of the free world are absolutely right to express their concerns about human rights abuse in Qatar.

But the last World Cup was in Russia. And if a World Cup can be held in that gangster state, then quite frankly it can be held anywhere.