We cannot rest till Ukraine prevails and Vladimir Putin fails


AS the horror in Ukraine enters its seventh week, Britain is leading global efforts to ensure Vladimir Putin loses.

We have stepped up with our allies and partners to strengthen our Ukrainian friends in their fightback and to hit his regime where it hurts with sanctions. But we are not stopping there.

I’ve just come back from India as part of my diplomatic push to rally our friends in defence of freedom and sovereignty.

Next week, I will be flying out to Poland to see the great work we are doing on the ground to tackle the human cost of Putin’s war.

Then I will go to Brussels to work with our Nato allies and G7 partners to drive forward action.

This is post-Brexit Global Britain in action — muscular, assertive and decisive at a time of global peril. 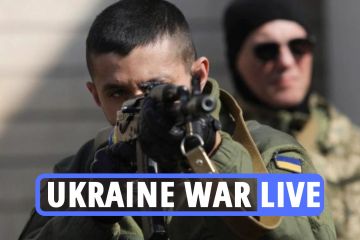 We can be proud to have led the way as the first country in Europe to start sending weapons to the people of Ukraine.

We have sanctioned more of Putin’s cronies and Russian businesses than any other country. And we are one of the top aid donors — sending food, blankets and medical supplies to help our Ukrainian friends through their darkest hour.

We know Putin has been blindsided by the strength of the West’s response.

He thought the people of Ukraine would either wilt or welcome his troops with open arms. Instead, they are more likely to greet them with a missile from a British-built NLAW tank buster. They are also kitted out with British-made Starstreak missiles to keep the skies clear.

The UK has set the pace in sanctioning Putin and his henchmen. We warned alongside our G7 partners that Russian aggression would have severe consequences and have followed through since with the strongest sanctions they have ever seen.

But our job is far from done. If Putin was serious about peace talks, he would have called a halt to the shelling of innocent civilians and pulled his soldiers out of Ukraine for good. We can, and must, do more to make him think again.

To get peace, we must keep being tough. That means doubling down alongside our allies and partners on what has already forced Putin on to the back foot — sanctions against his regime and meaningful weapons for Ukraine. Our sanctions are pushing back the Russian economy to the Soviet era. That has only been possible by joining forces with our allies to harness the G7’s economic muscle, as countries who represent more than half of the world’s net wealth.

However, that will not be enough to cut off the funding for Putin’s war machine. We need to go further and faster to crack down on those filling his war chest.

The UK is leading by example in going after those bankrolling the Putin regime. We have hit 16 Russian banks and are cutting out our imports of Russian oil this year. We are zeroing in on other industries complicit in this war, like diamonds. We are slapping Putin’s lapdogs and cronies with sanctions.

There can be nowhere to hide. This week, we sanct-ioned the anchorman Sergey Brilev and other propagan-dists who peddle Putin’s fake news. We also hit Colonel-General Mikhail Mizintsev, dubbed the “butcher of Mariupol” for spear-heading the barbaric siege warfare against this Ukrainian city.

We are sanctioning Putin’s favourites such as Roman Abramovich. We are turning the screw on Russian oligarchs by grounding their jets and seizing their superyachts.

They cannot wash their hands of this illegal invasion. Strength is the only thing Putin understands and that must keep defining our response. We need to continue hitting his regime hard, with further sanctions.

This is key to putting Ukraine in the strongest position possible in any peace talks. We cannot allow our friends to be sold out at the negotiation table. That means ensuring Putin is never able to threaten Ukraine again.

The world can see the untold horrors caused by his aggression. We have a moral duty to act, which is why the UK is helping people by providing £220million in humanitarian support.

We have been packing around 16 trucks with food and water to help those towns and cities surrounded by Putin’s forces — the first deliveries arriving this week.

We have also flown out more than 13 planeloads of medicine and medical equipment.

At this defining moment, Britain is stepping up to do what it does best. We are taking the lead in defence of freedom and democracy. We are reaching out to broaden the coalition of free democracies. And we are showing our steel in this mission to stop Putin’s war for good.

Now is the time not just to stay the course but to put our foot to the floor.

Together, we cannot rest until Ukraine prevails and Putin fails.

Help those fleeing conflict with The Sun’s Ukraine Fund

PICTURES of women and children fleeing the horror of Ukraine’s devastated towns and cities have moved Sun readers to tears.

Many of you want to help the five million caught in the chaos — and now you can, by donating to The Sun’s Ukraine Fund.

Give as little as £3 or as much as you can afford and every penny will be donated to the Red Cross on the ground helping women, children, the old, the infirm and the wounded.

The Ukraine Crisis Appeal will support people in areas currently affected and those potentially affected in the future by the crisis.

In the unlikely event that the British Red Cross raise more money than can be reasonably and efficiently spent, any surplus funds will be used to help them prepare for and respond to other humanitarian disasters anywhere in the world.